Time to catch up a little. I have been attempting to reduce my stash because like most of us I will need to live to 200 to finish it all. But I can humor myself with this attempt at reduction. You will also see that while I reduced my stash, I also signed up for new stuff!!!

It is an addiction!!!

Here is a little coaster kit from Scotland. It is a Wee Highland Coo. I included a copy of the information sheet because it is interesting and I don't want to type all of it! 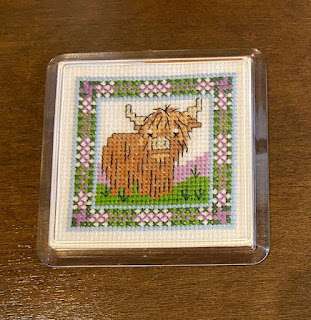 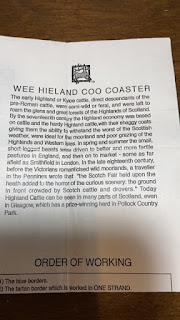 Then I worked on a pilot class which is for ANG National in 2022, so I can't show you the photo of that project yet. I have to wait until ANG announces it. But, I did finish it and it was a lot of fun. Different stitches and fibers than I normally use.

Then I worked on some Christmas Stitching and some cards. The ornament is from 2000 or 2001 Just Cross Stitch Ornament issue. I made it to sell at our Expo, but liked it too much. I am keeping this one and will make another! 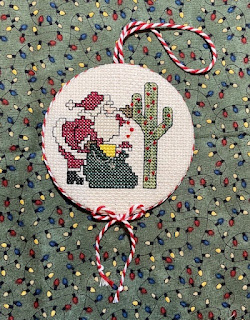 Some fun card layouts. I used by Brother Scan n Cut to create the heart cutouts and then placed some rainbow glitter paper underneath. 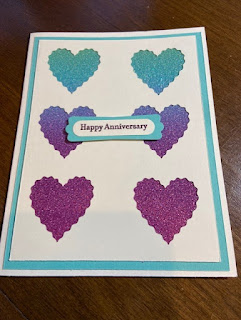 My local Paper Crafts Club had a challenge to use weaving. So I used cardstock strips and twine to create this open weave card. 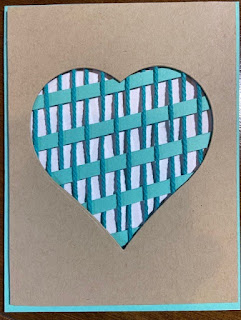 This is from my stash, Priceless by Glory Bee. Copyright 2005, so the prices may have gone up since then but the afternoon is still priceless! 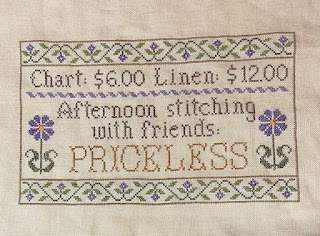 This is a chart with charms from Hinzeit called Golf  is also from stash and I do plan to sell it at our Expo on Nov. 6. I have a small black easel it stands on. 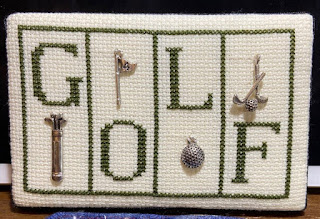 I backed it with some grassy green fabric and black ribbon on the edges. 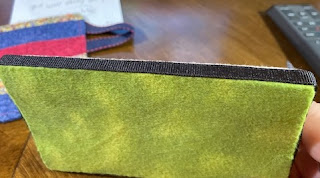 So I reduced my stash by three items. But I also did four new things =>> the Santa ornament & the other the pilot class plus these next two pieces. OOPS, but at least two of the new items are finished!

This is a ANG cyber-course called Elements by Carolyn Mitchell and the colorway I chose is called Fire. She also has one with blues, greens and grays called Earth. This is the completion of Lesson 1. We are getting one Lesson a month. Lesson 2 is Oct. 1. You can see by the thread bag photo it is quite vibrant! 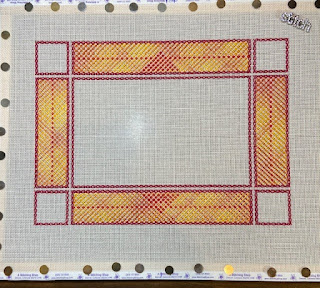 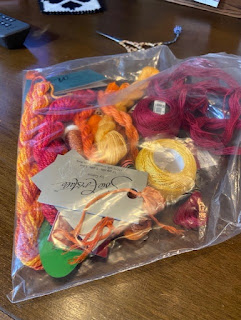 This year the ANG National Seminar was to be in Kansas City, MO. They opted to go virtual. I signed up for a class by Janet Zickler Casey called Santa Gnome and have completed Lesson 1. Lesson 2 was emailed today and we should have all lessons by the end of Sept. when a zoom call is planned. This was sort of the second ANG Seminar I have ever been too. The first was in Washington D.C. just before 911. I remember passing the Pentagon every night as we shuttled to different needlework shops. We drove home to North Carolina on Monday 9/10. 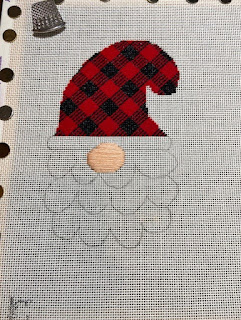 ANG mailed us some Seminar goodies, a mask and a thread minder which is an invitation to the 2022 Seminar in Tucson which also celebrates the 50th Anniversary of ANG. I hope to be able to go next year!! 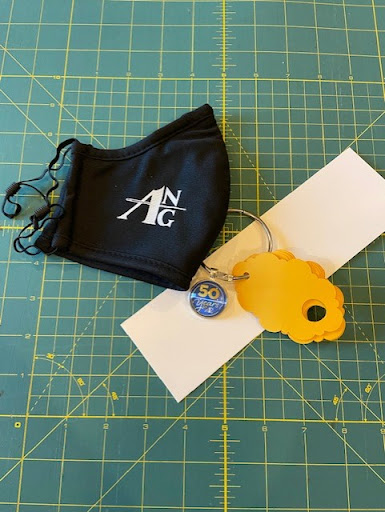 That covers it for now!!
Happy Stitching!!