In 2021 we had a new baby addition to our family. Niece Jill her husband adopted a little baby girl that is the half-sister of the baby boy they adopted last year. Her name was just the right size for me to adapt this "Baby's" First Christmas to Aliya's! Her mom loves penguins, so when I saw this in the December 2021 issue of Just Cross Stitch Magazine, I knew I had to make it for her! 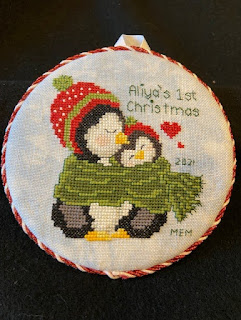 My college roommate likes rabbits. But realistic ones not animated. So, when I saw this year long series for 2018 called Mini Bunnies in Just Cross Stitch Magazine, I thought of her at once. It did not stitch it right away, I wanted to figure out a way to finish it. After some stops and starts I figured it out and stitched it for her Christmas this year. Here are the twelve rabbits. Top photo has Dec, Jan, April, May, Aug & Sept. 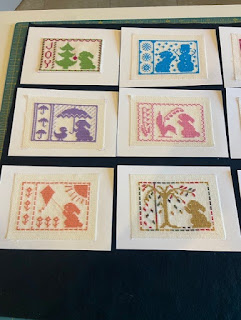 This photo shows Feb, March, June, July, Nov and Oct. Oops I photographed them out of order. 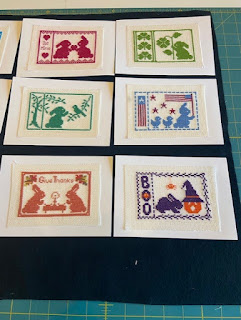 I found a shadow box that was just the right size, but I needed it to be kind of a reverse shadow box. So I trimmed the mat so it touched the glass and then there was room for all the monthly rabbits behind! 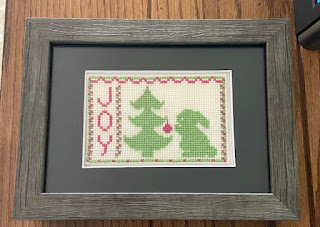 I cut out a template so I would know the opening. I cut comic book board to match the inside, then marked it with air removable fabric marker (I tested it first to make sure it would go away, and it did)! I used the outer mat as my pattern for the size and placement of the picture. For December, I cut the stitched piece leaving a couple of squares one each side, centered it on the drawn square and sewed it on with my sewing machine. I used a longer stitch than normal so not to perforate the comic book board. I also put my initials on the back and the month it was supposed to be, a couple could go either way! You can see, for the other months I did not cut out the stitched piece, I lined it up with the sqaure I drew on the comic book board and sewed it in place. A little trial and error. While both look good, the later method was easier.
Now all Sandra has to do, is open the back and change out the rabbit each month. Being a shadow box, it has a wide frame and sits on a table on its own.

I told you about the ornament I stitched for our tree on the post. Here it is on our tree. 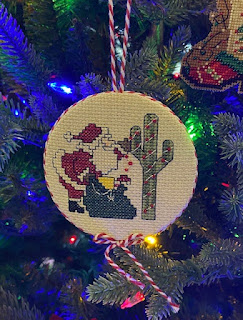 This year I joined the online ANG Chapter of Cyperpointers. The November meeting program was this cute design by Linda Lachance of Northern Pine Designs called Christmas Bell. It was designed to fit into an 8 x 10"-inch frame with a matt. So, I am on the hunt for the right frame. It was quite fun to stitch with different stitches, fun thread and beads. 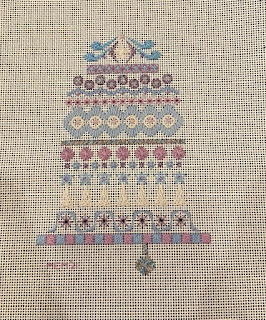 That is about all for now, more tomorrow.

Posted by Sun City Stitcher at 12:22 PM No comments: