To follow up on my previous post: I could not find just the right ribbon to use for the finishing so I went a different way. I created a fabric border for the edges. I cut out comic book board one inch wide and 21 inches long - well not exactly since the comic book board is 8.5"x11". I cut two one inch strips and them placed them around the stitched block, scoring the corners to make them fold over nicely and cutting away any excess.

I then padded the comic book board strip with batting (hindsight maybe padding the bottom was not a good idea - it is a tad wobbly, so I may add feet of some sort) and then covered it all with the same fabric used on the back. 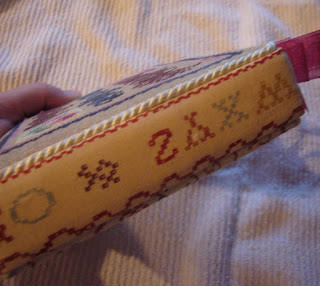 Then to hide some of the edges on the front I glued cording around the front and added a bow at top. I am not 100% sure I like the bow, but have until August 8 to make up my mind before I take it to the Jefferson County Fair. 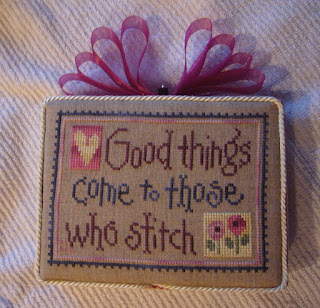 Good Things Come to Those Who Stitch

I first showed you this on December 8, when I finished the stitching. Well now I am in the process of finish finishing and hope to enter it into the Jefferson County Fair this August. All I need to do is add the ribbon around the sides and a bow at the top. It is Snippet #572 -  Good Things- by Lizzie N Kate. 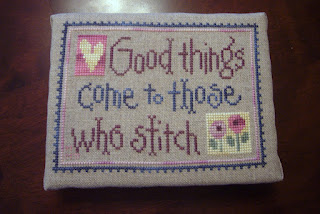 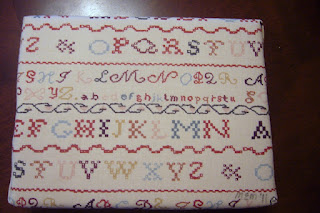 It will be a stand-up and this is how I made it:

I cut foam core to the size I wanted and as many to get it as thick as I wanted (I think 4). Using flat head pins in the sides, I wrapped it with batting cutting out as much bulk as possible. Then pinning the sides I wrapped the sampler fabric on the back and about half way on the sides. I then did the same with the stitching. Again cutting out as much bulk as possible. I folded the corners into the sides and not the bottom which I thought would make the bottom bulky and not sit right. You can see this a little bit on the top photo looking at most corners of the piece. The ribbon should hide most of this.

Now I just need to add some ribbon to the sides and a bow at the top I am thinking of a dark red. I am also deciding if I want to get some big flat buttons to add feet to it.

That is about all for now folks!
Posted by Sun City Stitcher at 7:00 PM 1 comment:

Hug your loved ones and appreciate your family and friends. Sad day here in Aurora after a gunman shoots and kills 12 people injures 50,  ages 3 months to 31 years. I did hear that the 3 month year old has been treated and released. He also shot off gas (possibly tear gas) just after the start of the midnight premier of the new Batman movie.

All is well here in that I know my family is safe, don't know yet if anyone I know was at the theater, I hope not.

So please think of those affected, say a prayer, and hug your loved ones....you never know what could happen.
Posted by Sun City Stitcher at 7:01 AM 4 comments:

Well today is the new moon for July, so here is my report. Near the top are the ribbon embroidery orts and the rest are from the sampler I am working on. 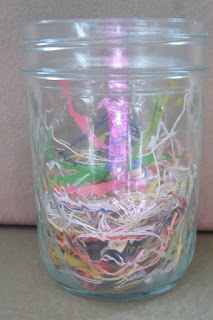 Wondering what all the fuss about TUSAL?? Check out this linkfor more information.
Posted by Sun City Stitcher at 9:49 AM 3 comments:

The Foothills EGA Chapter project for July was a ribbon embroidery needle book. I felt is was too large for a needle book and had so many already that I just finished it without the felt pages, to decide what to use is for later. Here is the outside of it: 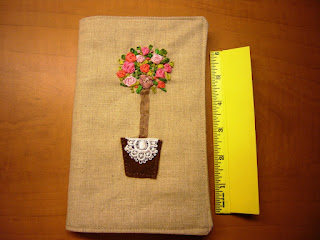 That is a 6 inch ruler to give you an idea of how big it is. I made spiderweb roses and some french knots for flowers in various colors of silk ribbon. I used various shades of green ribbon for the leaves and made them using lazy daisy, french knots and leaf stitches. I was not sure how to do the stem on the pot - which was originally a piece of brown ribbon that would need to be make into the pot shape, so I changed to wool. I placed the stem under the brown wool pot and appliqued the pot down. I then did a running stitch up the stem and then did the flowers at the bottom of the topiary. I stitched the lace piece on the pot using white sewing thread and a basic sewing stitch.

Here is the inside once I decided to make it into a note pad holder. If I had decided that from the beginning I would have liked to put some stiffening inside, and maybe ribbons on the sides to tie it closed, but this still works! 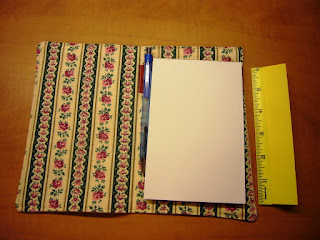 I just added a strip of Ultrasuede near the top to hold the pad and the pen. I think the pad is 4 inches by 6 inches. I also embroidered my initials and the year on the backside.

That about covers it for now!

Posted by Sun City Stitcher at 7:42 AM 5 comments:

I thought I'd show you how far along I am with my band sampler from Sampler and Antique Needlework Quarterly. It is a sampler they are presenting this year in three parts. This is the top half of the section from the Summer issue (which is has part 2 of 3). So far this is all I have been stitching for the summer and hope to get caught up before the Fall issue comes out!! 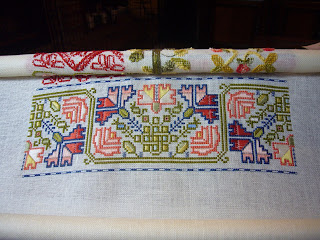 I showed you the top third finished on this post.

That is about all for today!!

Editors note: I meant to post this Sunday evening, but stitched instead! So it is Sampler Sunday a day late (and maybe more for other time zones).
Posted by Sun City Stitcher at 7:14 AM 7 comments:

Happy Birthday to the U.S.A!!

Here is my red, white and blue display for June (Flay Day is the 14th) and July (Independence Day is the 4th). You will see I am a tad behind on my patriotic  stitching with only one thing ready! 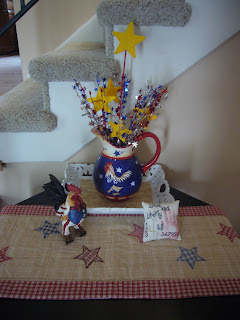 Happy 4th of July to you all where ever you are!!!!

Posted by Sun City Stitcher at 1:10 PM No comments:

Email ThisBlogThis!Share to TwitterShare to FacebookShare to Pinterest
Labels: Red, white and blue

Sometimes my job gives me nice surprises. Today was one of them. I drove over to the Ken-Caryl Valley area and look what was in a front yard chowing down on the tree leaves. 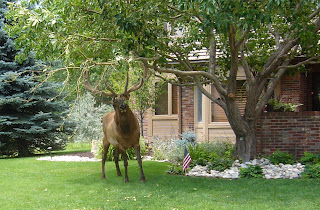 The fellows with KC Ranch that I was working with told me that he was one of three grandfather elk in the area. He was HUGE and BEAUTIFUL! Good thing it was not fall or I think he may have charged us (by now there were about 4 cars stopped). All remained smart and stayed in their vehicles. I did see a female in the next yard over, but did not get a picture since she got up and was leaving as I was driving by. 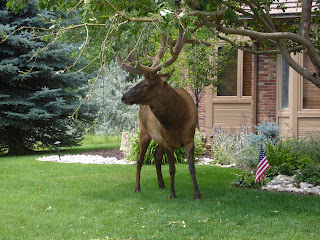 This area was our last stop for the day and what a great way to end a project on a hot day! 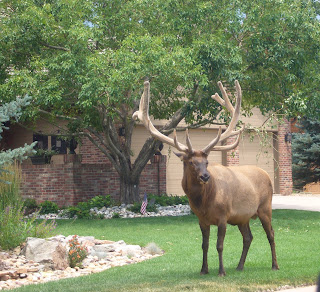 About this time enough cars had stopped he was getting a bit irritated I think (note the flared nostrils), so I left rather than have to explain Elk hoof prints on the company car! In turning around I had to go past the area again and saw the elk heading for the ravine. He did indeed have enough of us.
Posted by Sun City Stitcher at 12:56 PM 6 comments:

My Favorite Watering Can

This is my favorite watering can because it belonged to my parents and everytime I use it I think of them. 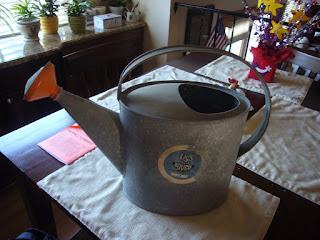 I am not sure when it was purchased other than I am pretty sure is was when we lived in West Los Angeles, so it would have been purchased prior to our move to Santa Monica in 1971. I see whenever it was, it only cost $3.75. 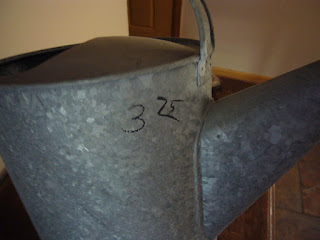 Here is a close up of the label. It is falling apart and I attempted to clear coat it on to the can, not sure that will work, but I have a photo of it anyway! Could be possible to date it by the label, not sure. 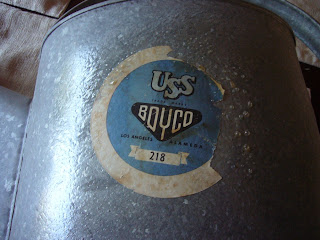 That is all for now, it still works GREAT and I used it Sunday to water our whiskey barrels.
Posted by Sun City Stitcher at 9:13 AM 2 comments: