Under a Copper Moon

I needed a new project to stitch on in the evenings now that I have finished American Patchwork.
So, I picked out this project that was a Saguaro ANG (American Needlepoint Guild) two day workshop in October of 2018. It is called Under a Copper Moon and was designed by Toni Gerdes, who also taught the workshop.
This photo is not how it was by the end of the workshop, I had worked on it a bit afterwards. The mountain at the left is a batik fabric we cutout, padded and applied to the canvas using fusible web.
The moon was on a separate canvas on which we heat applied copper foil and stitched over the top. It was then padded and appliqued on the bigger canvas much like I did with Yei-bi-chei. 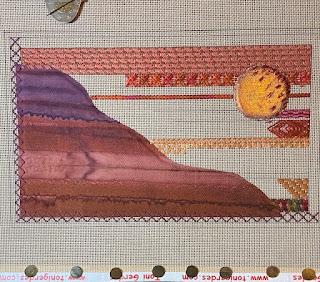 It is on a 15"x10" piece of sandstone 18 count mono canvas and uses a variety of  solid, overdyed or variegated cotton, silk and metallic threads. The copper metallic is DMC Metallic Effects and is a PAIN IN THE YOU KNOW WHAT to work with, but it sure is effective.
Happy Stitching!!
Posted by Sun City Stitcher at 12:00 AM 1 comment:

I last told you about this canvas project on June 10th.

I have been stitching most evenings and got it finished and even put it into the tray!!

This picture was taken without the glass, so you can actually see the stitches.

The project was designed to fit onto a Sudberry House Shaker box, but I already had this Sudberry Petite Serving Tray. The opening of the tray is larger than the Shaker box, so at the teacher's suggestion I traced the oval onto my project and added to the squares as needed to make it larger. This took a bit of work, some squares needed to be make larger or totally made up since the original called for basket weave to fill in smaller areas. But it came out nicely in the end!!

It was fun to do and I put the instructions into a portfolio, so it is kind of like a stitch book now. 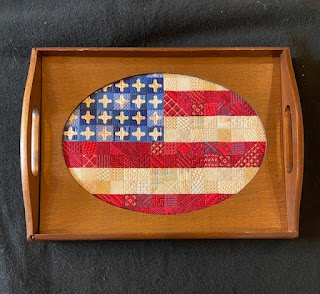 American Patchwork, by Debbie Stiehler.
Now to put away any leftovers of the 27 different threads that were used for this project!! 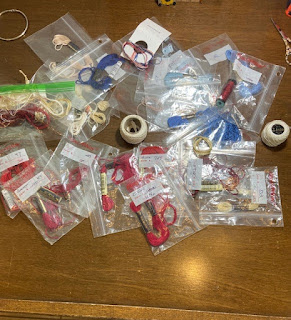 As I told you on June 9, I am taking a quilting class with my local quilt club, Quilting Bees. Later today will be the last class (class 4), so I thought I would share with you my progress.

Here are the results after 3 classes (actually I jumped a head a bit, teacher said we could) and I put all the pieces together which we could have waited to do at class 4. Class 4 includes next step decisions, so I wanted to get a much done before then as possible. It is about 24 inches square. 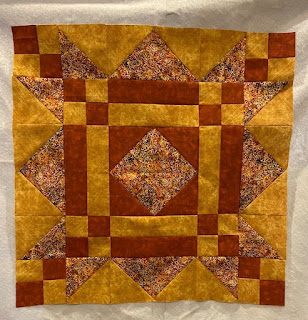 Throughout we have learned how to cut fabric, best sewing practices, etc.

Class 3 was the center square in a square and Flying Geese.

Class 4 will be sewing it all together and deciding next steps. I may add a border and not much more. Some people may want to make more of the same and put them together to make a bigger quilt, etc. Lots of possible options to learn.

I think later in the year, maybe the fall we will get back together to create the sandwich and quilt it. This will give people time if they are making it larger with more blocks. Just another fun topic for class 4.

I last told you about this project on May 30th.

I finished the garland and was brave and cut it out! 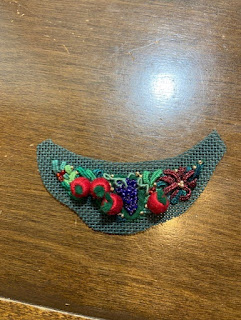 Here it is attached to Santa. 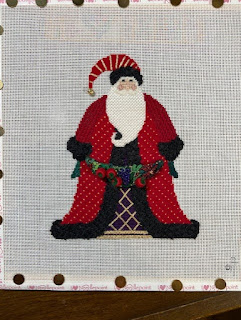 As soon as I get some #4 Kreinik braid in color #32, I plan to do Father B's Background Stitch and will attempt to finish is myself as a stand up. It will not be shaped, but a rectangle. I can handle that and have done it before.
Happy Stitching!!

Land of the Free Framed

I last told you about this project here.

Yesterday a Mill Hill Frame I ordered for it came in and I framed it up all by my little self! 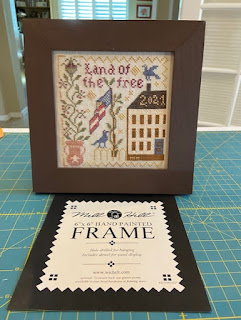 There is no glass and I am ok with that. I have used these Mill Hill frames before and really like them. Originally I thought I might use a red or blue frame, but I think this brown looks great!
Now it sits with my other patriotic items on display for May, June and July.

It is called American Patchwork by Debbie Stiehler. It was an April, 2010 Foothills EGA workshop. 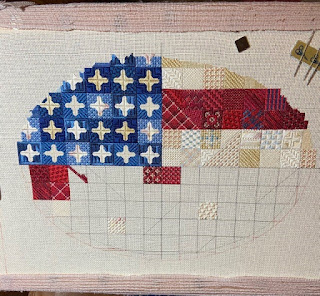 Since it is easier to work on the garland for Dela Robia Santa at my studio desk, I picked American Patchwork up to work on in the evenings. I set a goal to get it finished by July 4. Note I did not say what year!
Here are some progress photos: 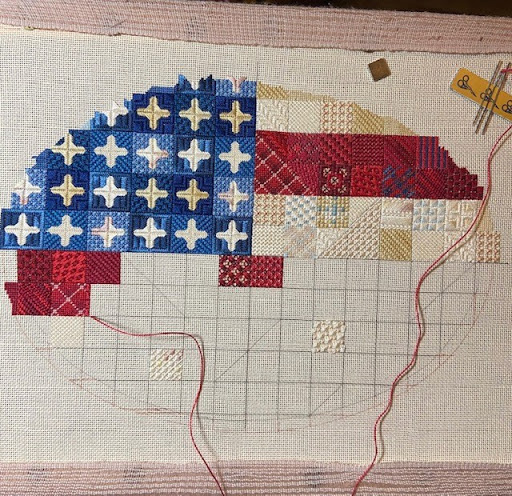 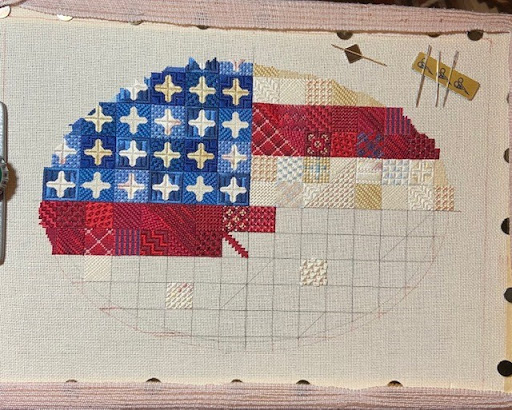 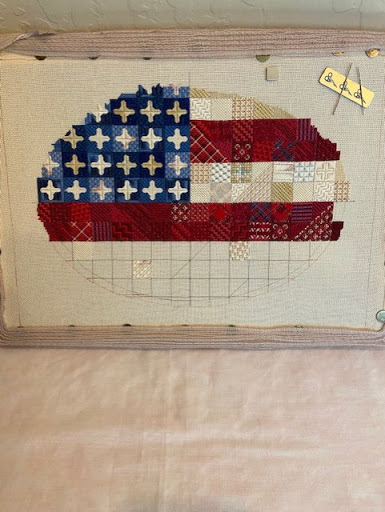 June 8
I have one partial square to do to finish the red stripe. The edges are not smooth since it will be finished inside a tray with an oval opening, so I do not need to finish each square around the edges (unless I want to) because they will not show.
After this is the white stripe and a little bit of a red strip at the bottom in the middle.
July 4 here I come!!
Happy Stitching!!

My local quilt club, Sun City Festival Quilting Bees, is holding a 4 week class every Friday afternoon in June, called quilting 101. We  are learning (or re-learning) the basics. We will end up with a project that is about 24 inches square, but we can add to it and make it larger if we want.

Here are my fabrics. 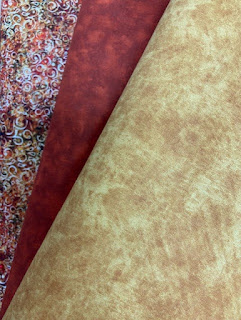 Day 1 we worked on squaring up our fabric and proper cutting. We made strips and four patch squares. Here is my result. 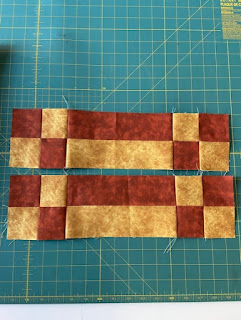 This Friday we will be working with half square triangles.

That is all for now!

Posted by Sun City Stitcher at 4:20 PM No comments:

In 2011 I volunteered to be a pilot stitcher for an upcoming Embroiderers Guild of America (EGA) Group Correspondence Course (GCC) called Needlework Tool Case (since retired) by Mary Long .

A pilot stitcher is kind of like a manuscript editor. We stitch the project with the provided instructions marking any corrections or areas unclear to us. A good pilot will also mention the good stuff about the instructions. The idea being we find any problems before it becomes a GCC.

Our instructions were to only do the stitching and then mail it to the designer for critique - just like we would if it were a GCC. We act in all cases like it is a GCC, except it has a more condensed time frame and we need to pay closer attention to the instructions, if that makes sense.

As such, I never finished finished it (finish finishing is making the stitching into it's final product - pillow, framed, etc.). For whatever reason at the time, I just did not understand what I was supposed to do to finish it. Well, I was bound and determined this past weekend to get it done. This time the instructions made total sense to me and I got it done! Go figure.

It did take a bit of hand sewing though, so a tad time consuming. I used my sewing machine to sew on a lining. Then I had to fold the canvas edges over the lining and hand sew that down. That was followed by hand sewing down the inside with all the tool case pockets (which I could make on the machine). That was followed my hand sewing down the twisted cord I had made for the edges. Good thing it is baseball season! I love to stitch to the baseball game because it is slower paced and there is the instant replay! 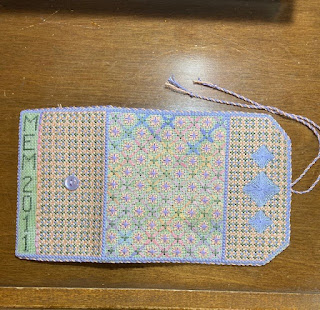 Here is the front. I decided to make my cording the tie down with a button. 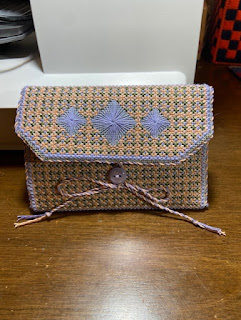 Here is the inside. Felt for needles and pins, a pocket in the center and a scissors holder (twisted cord and slots. The inside is made of Ultrasuede. Below is all that was shown in the instruction. We were told we could make other holders for the inside, but I was not sure what I might need and could have used some examples to give me some ideas. 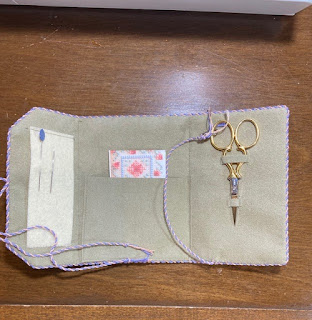