As I mentioned in a previous post, I have started this piece from the Rocky Mountain Region 2008 Seminar again. It is a two canvas project: Santa on one and a garland on another. Well Santa is all done, except for the background. Now on to the second canvas- the garland. You can see where it will go and she had us basketweave in green over the white canvas.

I think I am moving quite along on this partly because I stitch almost every evening for 3 - 5 hours and because it is not too big. The Santa is 5 3/4" x 7" on 10 x11 inch stretcher bars. It has been quite fun, although a bit tricky on the coat in places. As you see she has it slant in different directions on each side. Well she only charted the right side and said to reverse it for the left. The stitch for the sleeves was tricky for me to figure out at first. The rest of the coat was not as difficult to figure out and I am still enjoying stitching it. 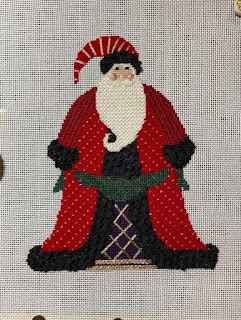 Below is how much I got done on the garland at Seminar. It has the grape clusters and part of a poinsettia competed.  She also had us make an apple (covered a red pony bead) but that is not attached yet. You can also see at lower right a doodle (practice) of a needlewoven bar which are used for the poinsettia and for leaves. For size reference the needle minder is about the size of a quarter and the canvas is on 6 inch square stretcher bars. 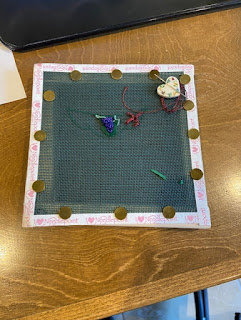 What is Della Robbia?
I should mention it here that the design spells it Della Robia (one b).
Della Robbia is named after an artistic style of the 15th century Italian sculptor Luca della Robbia (1400-1482) and members of his family. They used fruit such as apples, oranges, pears and grapes as a decorative element in their work. This idea was eventually used in live arrangements such as wreaths or garlands and the style became known as della Robbia.
Here is a link to some art examples at the National Gallery of Art.

That's it for now!