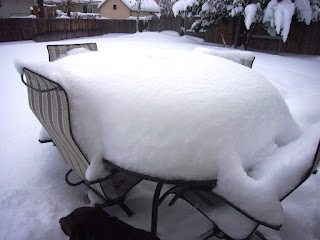 Yesterday at this time it was half as tall. 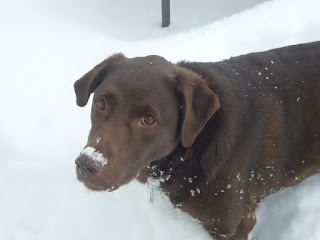 All good winter scenes have a snow nose picture. Miss Maddie is not a huge fan of the snow and with her bad knee we have not encouraged any rigorous play. 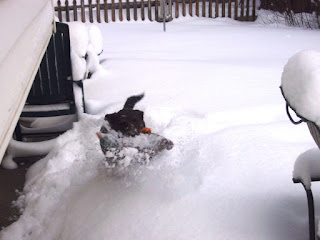 Maddie rescues (stuffed) duck!
Silly girl took her stuffed duck out. She does not like it, however when it is covered with snow. She will shake it all off if I can convince here to even pick it up. I sent her out to get it and got this shot as she was running back.

Soon the sun will be out and temps above freezing and it will all be gone - hopefully before the next round. We broke the Feb 3, 1932 record for most snow which was 9.5 inches. Yesterday's total at DIA was 12.5" In an average February we get 5.7 inches and this storm has given us 15 inches (again at DIA the official weather station for Denver). We live closer to the foothills and often get more snow than the airport which is basically out in the plains (no pun intended). Starting tomorrow we will be above freezing and mostly sunny for a number of days so it will not be around long - especially the main roads. But for now I will be inside by the fireplace stitching and drinking hot coffee!

I love snow....as long as the power stays on! Hope you are warm and safe!

Sandy in So Calif said...

Beautiful!!! I lived in Pueblo years ago and never saw anything like that!

You most definitely have surpassed us now! I hope no more comes our way.

Hope you stay warm! That's a lot of snow to deal with. Poor Maddie.... poor duck.

I really do not miss snow...I will just stay here in Arizona where I am still walking around barefooted!..Stay warm!