Well I have been stitching a bit during the Olympics (lets face it I stitch a bit all the time) and chose some red, white and blue stuff.

Here is my progress with "Coins Patriotic" by Bent Creek (c) 2007. This was taken on August 6 and I meant to post sooner, so I am a bit farther along now, but you get the idea. I did run out of the border thread, WDW Swamp water, but hope to get it done by the end of the Olympics. 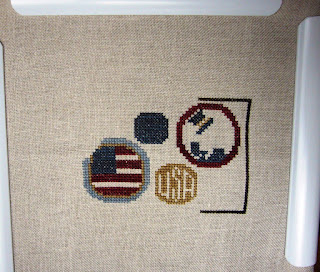 The next item is also a Bent Creek design. It is from the 2005 Zipper Series and is called "Stars" a zipper kit (c) 2005. I love these kits because it is on 18 count linen and done over two using perele cotton. They are fast and easy and nice designs. This one I have been carrying around in my purse since 2006 or 2007 to work on while I wait places, so it has taken a while to finish. I used to travel a lot and these bigger holes over two were GREAT on plane trips. I would do the out line of a single color area and could fill in while on the plane without need of the chart.

At any rate, I was working on it while having my car serviced and only had the two blue stars to finish so when I got home that is what I did. Now I need a new purse project though.

I do have one more Olympic stitching project, but it is a gift for my DH, so not sure I will post it yet, plus it is only partially finish-finished. I worked on it while he was in Texas for some training.

That is about all for now, but I leave you with a picture of cutie pie Maddie! I did the red eye correction on her and they came out white. Not sure which is worse! Note the nice close to the body left knee. Before her surgery it would splay out. She is doing quite well and Aug. 30 will be the 16 week post op mark when she can have her freedom back! 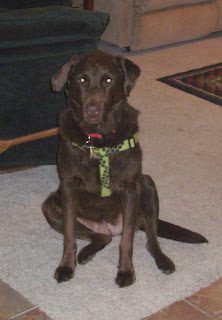 Your Olympic stitching choices are very appropriate! Glad to see Maddie is doing so well.