I Have a Dilemma & A Heart for Hospice UPDATE

My friend Laurel did the Southwest Sampler and gave me the rest of her ball of #8 pearl cotton. I then found someone else with a partial ball and it should be enough!!

I was not aware until recently that anchor no longer makes pearl cotton for the U.S. market. This apparently has been the case for a number of years. Where have I been??

I was in need of some to finish off this Heart for Hospice heart. I had used thread from my stash and never thought I would need to worry about an Anchor thread. 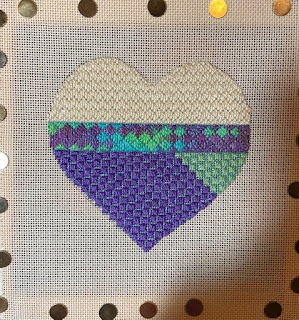 I started out with some watercolor in my stash called Havana and worked from there choosing a purple and an ecru # 5 pearl cotton and some purple Kreinik braid. Well you can see in the photo there is a bit of green, that is where I ran out of the #5 Anchor Pearl cotton. I also needed some other pearl, so I went to a shop that told me they don't carry it. Then I called a shop in Denver and she told me the same thing, BUT she told me why. This was nice, since it saved me calling more shops or driving 50 - 60 miles one way to a shop.
So I was able to make it work by using some green from my stash and then I changed the Kreinik to a blue to pull the two together. Now I just have to remember which chapter was doing this (it was pre-covid) and turn it in!

But my biggest dilemma is my dire need for a ball of #8 Anchor Pearl Cotton in color 337. I have been collecting the threads for Margaret Bendig's Southwest Sampler from 2008 Needlepoint Now. I have found everything except the #8 pearl. There are three colors and DMC makes an almost perfect match for all of them, except they do not make DMC #3778 in pearl, only floss. The closest DMC in pearl cotton is #352 and that is WAY TOO PINK.

So, I am on a hunt for a ball of #8 Anchor pearl color 337. I am also working on other possible work arounds. I have a friend who did this piece and she gave me the rest of her ball of cotton. I also looked at her piece and it looks like this thread is only used on one area, but it is the border and this piece is 15"x16". I would hate to run out near the end! I thought about using three strands of floss instead, but the border stitch uses two of the #8 pearls. So it would not look good to do one half pearl and the other floss. I suppose I could try floss for both? So much easier if they still sold pearl here in the U.S.

I learned years ago, that if you buy a chart that uses special threads to get those right away because dye lots change or they stop making the thread. I never thought that would have been true for Anchor Pearl Cotton!

Have you tried DMC 356? On the color charts it is the next darker, but barely, color down from 3778 and it is available in #8 perle.

THANKS! I compared Anchor 337 with DMC 356 since I have the Anchor floss. The DMC is too dark. It will not contrast well with the other thread used in the border.