I dove back into the beading box and found another project I picked up at a show from i-bead.com. Sadly I do not see it on their website right now, but they do have lots of other nice things!!

It is called Pearlicious and designed by Any-Loh-Kupser. It was not too hard and I finished it in an evening.

It came with a snap clasp which I have never used before and she gave a hint on how to attach it to the end so it would lay flat. I will try to explain. You string beads then run it though the clasp and string the same number of beads before the clasp and the tun it though the center bead of the bracelet, but you go in the bead the same direction the thread is coming out. You do this again on the other side of the clasp. Your thread should be coming out of the center bead of the bracelet in the correct direction to do this. Reinforce by going through all the clasp joining beads three times. Then repeat this process with the other half of the closure. Hope that made some sense, but her directions are copyrighted so I had to tell you in my own words.
I dove back into the beading box and found a necklace that may take me a little while to finish. It uses brick stitch, but for each row they are stacked three high. This will be new for me. The project is called Bargello Pendant by Carole Collier. I am doing it from the August 1998 issue of Bead&Button, but I think it is also in her book "Three-Bead Brick Stitch: Necklace Expressions, Seven Fabulous Projects for Intermediate to Advanced Beaders".  Which a quick google search just now found it here on Amazon. I could not tell if this necklace is actually in the book, however. I do not get any kickbacks for sending you to Amazon, just saving you all a google search step. 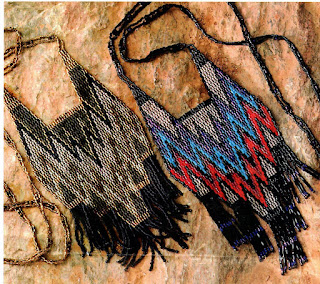 This photo is from the magazine. I am doing the colorway on the right and substituting Delicas for the Toho Antiques, so my purple will be more blue, but I think it will look fine. Here are my substitutions in case you find the pattern and want to get going.

I do not recall where I got these numbers. I have had this project in my box for at least 15 years since I know it was originally brought up in my bead group in North Carolina.
I will try to post some progress photos as I go along. I did get the foundation row and a little bit of the next row done before I went to bed last night.
Posted by Sun City Stitcher at 12:00 AM