Last Saturday was the final meeting of the year for the Sampler Guild of the Rockies. It is also when the guild has a birthday party and this year it was 18!! Always a fun time with door prizes, gifts for all and special opportunities to buy limited edition items (if you renew your membership by this meeting). We do not meet again until September, but last year the guild had a Retreat in June and will again this year. A fun all day stitching event - to be talked about at a later date.

Today I am posting pictures of the pincushion I made for the exchange. I used the silicone cupcake cups as the base. 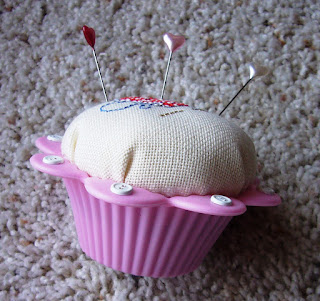 I wanted to use a chart and instruction from the booklet I purchased a year or so ago called Cupcakes Galore (I believe) but could not find it in the packed/unpacked/Goodness knows where anything is of my studio. So I "punted". Having made similar things before, I had a good idea on how to proceed. So I put some crushed walnuts in the base for weight. Made a matboard circle and gathered my stitched piece around it while stuffing it with 100% wool. I then tacky glued it in place. Next day it popped off, so I used E6000. Next day it popped off. Now I was starting to get close on time when this was due and a plan "B" was out of the question. And I was REALLY wishing I knew where that cupcake pincushion booklet I bought was!

Then I had an O DUH moment and guessed that the silicone was kind of a non stick thing. Off to google and I discovered it would be best to use a silicone glue (did I say duh already?). So I did and 24hours later IT DID NOT POP OFF!!!

Now, I had planned to glue cording around the base and some cute buttons on the cupcake cup petals, but it would not have 24 hours to dry. So I came up with this: 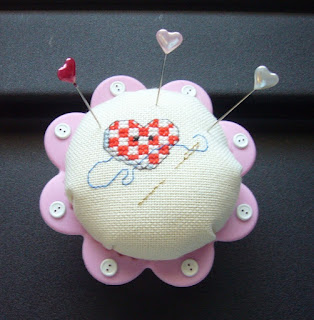 A quick trip to Archivers and I found the perfect button brads and some fun heart shaped hat pins. The recipient really liked her pincushion and I was happy to hear that.

Next I will post a picture of the great pincushion I received (as soon as I take a picture).
Posted by Sun City Stitcher at 9:30 AM

what a NEAT idea!

Cute pincushion, and the ;ittle buttons set it of beautifully