TUSAL - May and Miss Maddie

Well, the ort jar is still in a box, but I did do some stitching this month and I have an ort pile (rather small, but orts none the less).

The dark green ribbon that almost looks black is really a nice green, but my lighting was not so great for this picture. I am still trying to find a good photo spot in the new house. I also put in a large paperclip to give you an idea of the size of the pile. 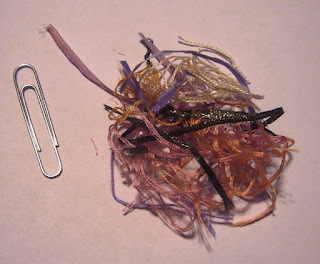 Now on to Miss Maddie, who seems to be enjoying the new house and her view out the front door. Note she has brought rabbit to enjoy the scene and fresh air too. I have sad news to report on "duck". Regular readers may recall that I replaced her duck after 16 months because it finally developed a seam rip and all my sewing stuff was packed. It had lost the "honk" many months ago, so I decided Maddie would get a new duck at the new house. She did, it lasted two weeks and developed a rip!! I did notice when I bought it that it did not appear to be quite the same duck as the old one and I guess I was correct. So now she has two ducks in the hospital and none to play with! But she likes rabbit too. 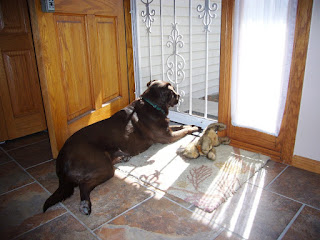 Posted by Sun City Stitcher at 7:53 AM

Your ort pile made me smile, you don't let a little thing like not having unpacked the jar defeat you!
Miss Maddie seems to like her new view

Glad to see that Miss Maddie is getting settled in too.
Your ort pile should be bigger each month as you get more and more settled.