One of my other non crafty interests are birds. I have been a "birder" since about 1986. It depended on where we lived if I had bird feeders or not,  how serious I was bout looking for birds and if I participated  Cornell Lab of Ornithology Feeder Watch.  Which was a lot of fun. Not sure I will put up a feeder here other than for humming birds.

Well two have showed up on our patio or courtyard with out much effort on my part. We leave our porch lights on and have acquired a few dead insects and probably a few still living around the plants. We have since put in yellow bug lights and the insects seem to have reduced quite a bit!

But this little fellow stopped by yesterday and today. He (or she) has been doing a fantastic job a cleaning up all the insects, even checking in the cracks. I had to take its photo through our greenish tinted thermal windows, but you can tell it is a Cactus Wren. On one hand it is one to add to my Life List, if you only count ones on your list that you have seen. I had heard this wren in So. California, but not seen it until now. Funny but it seems to be elusive in the hills of So. Calif, but I have seen them here and at other places in our community. Maybe that is why it is the Arizona State bird? 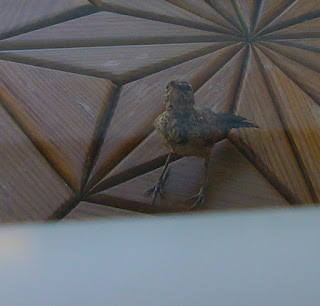 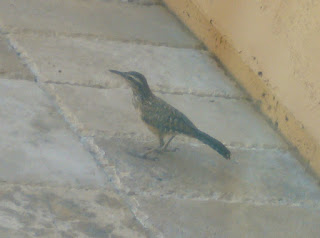 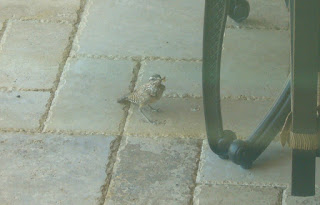 Also seen, but not photographed and another Life List addition was a Gila Woodpecker. Other birds I have seen are a road runner fighting it's reflection in a neighbors sliding glass door - not sure who won that battle.

Maybe I should explain to any non birders out there what  Life List is just in case you are interested. Basically it is a list of the birds you have seen (and some add heard) during your life time.

Some long tailed crackles seem to be in the area along with a phoebe like bird I have not been able to identify. We eat fairly often at the Indigo Grill here and I have seen house sparrows there (as well as the Cactus Wren and Grackles. Also a humming bird that whizzed by too fast for ID.


Well that is the Sunday birding round up. Hope you are having a fun day!

Your middle picture looks like a Roadrunner. I'm don't know if the Cactus Wren is seen here in the Prescott area, maybe cooler than they like. I had a Roadrunner up on my roof one time! Craziest thing I ever saw, lol.