I am a member of the Sampler Guild of the Rockies . One of the projects from last year is a French Sewing Box. I believe it is called a French Sewing Box because we are using only red thread which is a traditional color for French Samplers. It is made to fit into a 6 inch diameter round box found at Ikea. 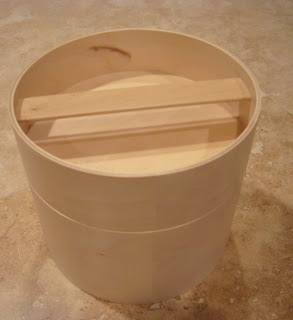 I finished stitching the top which will go inside the area under the handle. 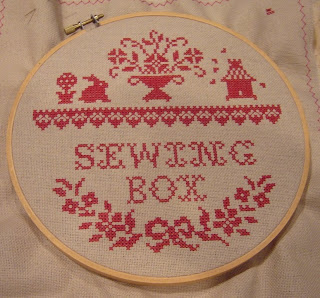 Stitched on 28 count Monaco in the color Tea, using DMC floss # 347.
Next I stitch the part that will go inside the box. It will sit on the bottom. There was a kit (I joined the guild after the project was announced) which included a cardboard piece to be lined with fabric and placed inside to act as a lining around the inside walls. I think I can manage to line it without the cardboard. But, first things first, I need to get the bottom done!
Posted by Stitcher at 8:11 PM

That is so pretty, looking forward to a picture of the assembled box

That's a great project you are doing with the guild.