The ort jar has been found!! And I placed all the orts I have accumulated since the last new moon into it. Last Friday (May 27), I had the California Closets Office System reinstalled into my new studio, and I spent the Memorial Day Weekend unpacking and putting things away (I will post more on this later) and I found the jar. 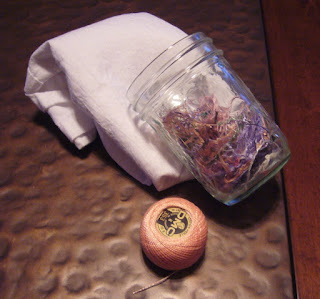 In a post that seems to have gotten lost in blogger land, I mentioned that I was a pilot stitcher for a possible future EGA Group Correspondence Course (GCC) and while I could not post pictures yet, my ort jar has orts from it. The dark peach, periwinkle, green and mauve threads are from that; I also discovered a WIP from 2006 that was well over half done and I pulled it out to work on (also a planned future post). It has some peach thread too. I see some lavender in there too and I am not sure what that is from….hmmm. Anyway, things are about back to normal after the move. We still have a few things to take care of and slowly but surely it is getting done.

We bought a tri-level with basement style house (also called split levels in some parts of the country) and I leave you with a picture of Miss Maddie at the top of the stairs that lead from the family room to the kitchen. She is mostly on the landing coming up from the living room that also have stairs (unseen in the photo) that lead to the bedrooms on the upper level. She seems to like to find a spot where she can keep track of everything (unless she is in one of her "caves"). She has a few spots in the house that is surrounded by walls and/or furniture that we call here cave. She seems to like some peace and quiet once in a while. 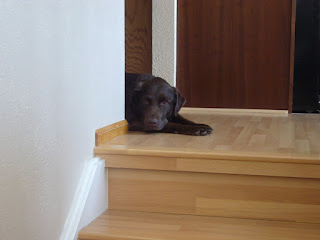 WOOF!
Posted by Sun City Stitcher at 7:09 AM