Today I thought I’d talk about my studio. At our other house I had California Closest make me a work area. It was removable, so I had them take it down and put it back up in our new house. It fit pretty well, except the wall with windows would not hold all the cabinets, so one cabinet is not over a desk surface any more, but I put a lateral file there to prevent head bumps, and the corner shelf had to be cut down in width also to accommodate the cupboard on the window wall.

Here are pictures of the room before: 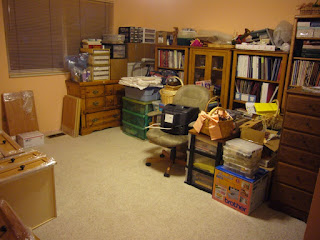 These are the walls the system is going on to. 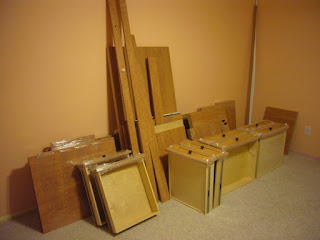 Here are pictures of the room after:
Still needs a bit of organizing, but I am getting there! 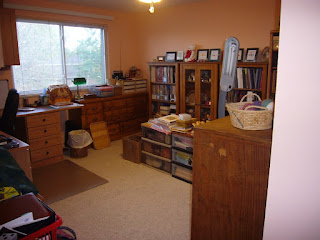 Below is the system installed. You can see where the cabinet on the left is no longer over the desk space. In the other house the right corner had two cabinets, but this new house has a window in the way! It all worked out though. 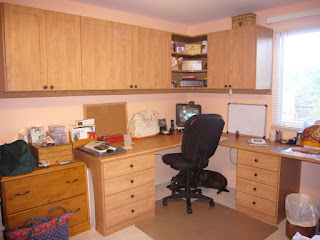 Note Miss Maddie has reclaimed her "cave" spot in the corner under the desk. This was her favorite hide away at the other house and I barely had the system up before she reclaimed it!

I got it all set up and about organized – still have a little to do on that – but was able to complete my first project in the new studio. It is a 2” square ornament that was the May ANG Chapter meeting project. It was a needlepoint freebie by Jean Hilton off the Rainbow Gallery (RG) site called Rainbow Gem #1 (side note -  on the RG website the pictures for Gems#1 and #2 are switched). But if you like the one I did it is Rainbow Gem #1. If you decide to do this it was easier to do step 3 before step 2, also this was an alternative colorway the presenter of the program worked up. She gave us two other colorways besides the one on the chart and suggested the change in order of the steps. This worked out real well. 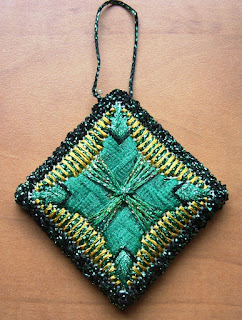 Posted by Sun City Stitcher at 7:22 AM

Email ThisBlogThis!Share to TwitterShare to FacebookShare to Pinterest
Labels: finishing, my studio

How neat....such a great space to create.

Love your ornament, and love your new space too. I'm glad that everything worked out (pretty much) in your new room!!