While unpacking and organizing my new studio space I discovered a WIP from 2006 that my Raleigh Chapter of ANG started. It is called “Shell Game” by Dakota Rogers and was from the ANG Chapter Project Notebook. When I pulled it out everything you see except the upper and lower right peach corners had been completed – well over 75 percent! Why I put it down I do not know. After I finish the peach corners the center is all that is left. It will have a woven shell and then real shell attached. I remember collecting shells for this in my travels to try and find ones that matched. Anyway it was so far along I thought I’d pull it out and work on it! 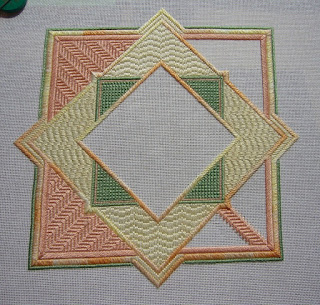 I took this picture last week, and I have been working on it. As of last night, all the peach corners are done. Now I start the center which involves padding and making a woven shell. Then real shells can be attached.

Which brings me to a new idea regarding WIPS. I think I will try and find them all and rate them as to percent finished. Then work on the ones with the least to do working toward the ones with the most to do. Maybe I will actually make a dent in them??? One can only hope.

Have a great day everyone!!
Posted by Sun City Stitcher at 7:48 AM

I love your idea for your WIPS!
Happy Stitching
Denise

Sounds like a good plan for getting those UFO's completed!

Sounds like a good plan to me. The shell piece is very pretty, can't wait to see if finished

What a lovely design! I'm so glad you decided to pick it up again. It's going to be gorgous when completed.
Your new studio looks great too. I'm glad the cave was still available for Maddie!

I like that piece and the colors as well! And I love your idea about the UFOs - I tell myself that every couple of years, but have yet to follow through. Let me know how it goes!!!