I finally finish finished the hornbook. I finished the stitching and told you about it here. The meeting to learn how to mount the stitching on the hornbook was the night before Maddie's surgery. I was able to get it to the point of mounting it to the hornbook during the meeting, but with Maddie's surgery it had been sitting in my studio waiting for this last step until I had a bit of free time. While on Maddie watch my hubby and I have to alternate cores or put her in the crate while we are home. I hate to crate her if I don't have too since she is in it all day while we are at work and all night while we sleep. My computer is in the same room as her, so right now she is out and able to enjoy lying in the sun. 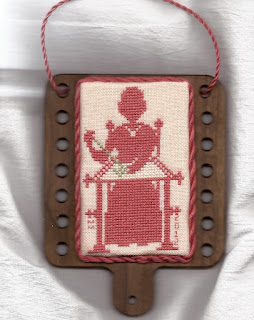 This was a Foothills Chapter EGA project. A member's husband made the hornbooks and she adapted a design for us to stitch and she instructed us on putting it on the hornbook. I think most people put it on their hornbook with the handle at the top so they could use the hole to hang it. I decided to mount it with the handle down which is how the original hornbook would have be oriented. The twisted cord I made for it originally was too skinny so I used it as a hanger and made a bigger cord to go around the stitching. As a side note, the original hornbook, would not have had those holes down the sides to hold threads since it was used as a means to learn the alphabet, math and other non-stitching related subjects.

Truth be told it has been finish finished for about a week, I just now got around to posting about it!


It was a lot of fun to do, THANKS Donna!

Email ThisBlogThis!Share to TwitterShare to FacebookShare to Pinterest
Labels: hornbook