Last night for the Denver metro area storms started around 6 pm to the east of us and we got our share with hard rain and the LOTS of lightening and hail starting at 12:10 am. The weather radio we have seem to go off every 10 minutes for a while and just before the same notice appeared on the TV, so our radio let us know sooner. We got an alert that finally affected us around 12:15 am. Woke me up, hubby slept through it!

Non- stop lightening flashes until about 1 am, tons of pea size hail layered the yard. I heard a few larger hail balls hit the various vehicles on the street - hubby's truck included. Had the window open and could hear the "pings" as they hit. Weather radio went off about then for a sever T-storm over SW Denver to include Chatfield Reservoir (and other locations) which put us right in the middle of it. Rained hard and fast, we had puddles and a small stream on our back patio.

Later (and the last alert of the night at about 1:30am) said flood warning since the storm dropped about 2 inches of rain in 45 minutes. I believe it!

Dog finally let me know she was not happy. Normally she would have gone under a bed by now, but she is in the crate. So I went down with her a bit until about 12:50 when things started to settle down. She did not bark after that at all.

Here are some pictures, you will see my lovely planted whiskey barrels took hit. Two are out in the open and two have a bit of roof over hang. Hail piled up to about 6 inches in places it could drift.

We could get a repeat around here today, but it is not going to be as hot, so hopefully will not be as bad. Right now the hail is melting and light fog all over.

As far as I can tell only plant life was damaged, house, fences and truck seem to be ok. 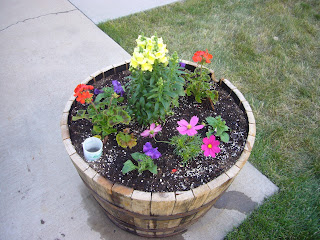 After: geraniums, petunias and cosmos not happy campers. Snapdragon seems to have done ok. 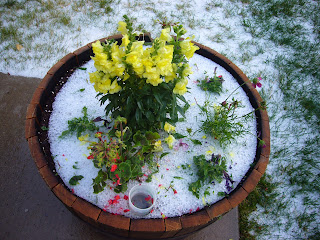 Our rain gauge in this barrel had 1.5 inches, a dead bee and geranium petals in it. 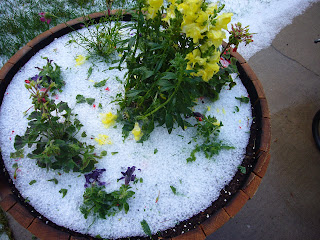 Hail drift on front porch is about 6 inches. 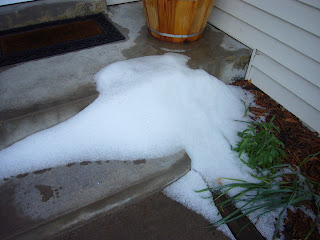 That is today's report, hope it is quieter in your neck of the woods!!!
Posted by Sun City Stitcher at 7:17 AM

AWWWW your poor flowers got pummelled! :( and the poor puppy :(

Hopefully the rest of your flowers make it through the rest - take care!!!

Oh my...your poor posies!
So glad there wasn't any damage (aside from your flowers) and I hope you have seen the last of that weather for a good long time!

My goodness - what a storm!

Wow - you had some rough weather! It is absolutely storming here in Cape Town for the past few days, but fortunately no hail storms. Wishing you clear skies!

I feel your pain. All my lovely pansies are kaput. Spent alot of time in the base ment that night!!

Yikes - it sounds like you had a rough night! I'm sorry about your plants :(