As I reported last September, I participated in the Sampler Guild of the Rockies mail art project this year. My birthday was in September and I received a beautiful mail art from Jean. I pulled a name of someone whose birthday was in March and now I can show you what I made for her.

On the front are motifs from a Sampler Book I have called, The Sampler Company's Book of Alphabets Motifs and Borders, by Brenda Keyes. It was published in 1999 and is now out of print. It is 28 pages packed full of motifs, so if you see it someplace check it out, you may want to grab it while you can.

Each person who wanted to participate filled out a form answering questions with things they like, favorite colors, favorite designers etc. so we'd have a good idea on what to stitch. My person liked red houses and birds so I put them on the front. I made the bird blue to represent the bluebird of happiness. 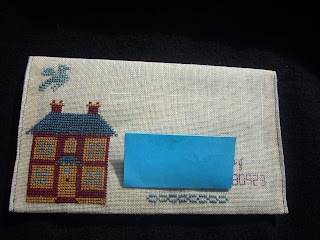 The rest of the designs are from Blackbird Designs Summer's Last Rose, which I think came out last fall sometime. Blackbird was one of her favorite disigners. The design I used on the back flap has more leaves to the left and right, but would not fit so I just left them off. I may also have changed the flower colors, but do not recall. I think I used the redder floss on these to coordinate with the red used on the pocket (next photo). 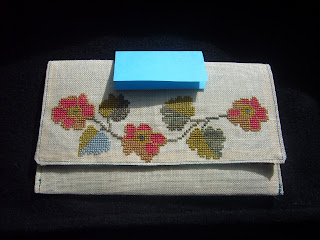 Under the flap I was able to fit this design on the pocket. You can also see the lining fabric I used. I put a small Blackbird Design chart inside the pocket as part of the birthday gift, I may have put in some needles too, but do not remember! I finished it in January and had to keep reminding myself not to forget to mail it in late March! 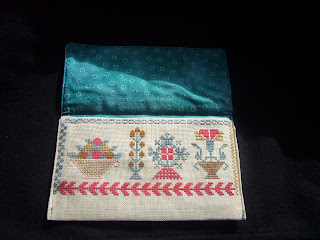 This is a closer shot of the area under the flap. 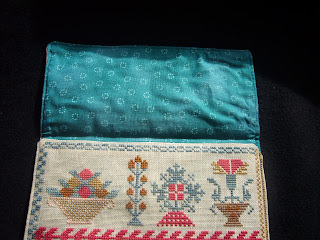 It was a lot of fun to make and the person I sent it to really liked it.

Email ThisBlogThis!Share to TwitterShare to FacebookShare to Pinterest
Labels: mail art, Sampler Guild of the Rockies

Wow! That is beautiful! Well done on all counts - stitching, design and finishing!

The mail art is beautiful!

Beautiful! What an accomplishment

So pretty...great design work and I am sure it is treasured.

Jo who can't think of a clever nickname said...

Beautiful workmanship, your partner was very lucky to exchange with you.
I have the Brenda Keyes book, it's well worth getting hold of. In fact anything by Brenda is good!