I finished another project from the Strawberries and Creme Sampler Guild of the Rockies June 2010 retreat. This one is called Wild Strawberry, designer unknown. It was stitched on a pale pink linen with DMC colors 151 (lightest pink); 3687 (pale pink); 150 (dark pink); 3053 (light green) and 3051 (dark green). I finished it with the provided fabric. We were given a green, which is sewed to the bottom of the stitching, and a red with black dots (which I used as the backing fabric and is shown underneath the pincushion in this photo.) The button and lace was included with the kit. The kit included three buttons to chose from and some beads. I was not sure what to do with the beads so I left them off. The example only showed a button, so that is what I went with! I stuffed it with 100% wool that I have on hand, I could have used crushed walnut shells, but opted for the wool. 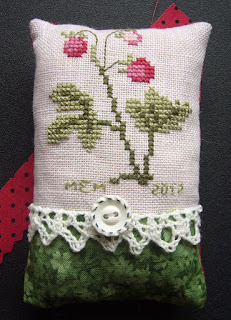 Email ThisBlogThis!Share to TwitterShare to FacebookShare to Pinterest
Labels: Pincushion, Sampler Guild of the Rockies, Strawberries and Creme

Congratulations on a beautiful finish.

I love your finishing and got a look at Strawberry Sampler from last post and like it too.
hugs,
babs