A Blast of Stitching from the past

I still keep in touch with my college roommate, Sandra. We lived through graduate school together at the University of Nebraska – Lincoln. Where I earned a Master of Science Degree and she earned her PhD. We both used our needlework skills to relax a little during that time I think. She sewed and I cross stitched. She also is a quilter and I ventured out to other forms of stitching and crafts as well.

Over the years I have made her things and she sent me some reminder photos in case I wanted to use them on my blog. What a great idea! Especially since they are projects I did not photograph before I sent them to her. She has made me some nice things too and I will try and post them for you this month as well.  Here are two stitched pictures I made for that fit her perfectly! (If I may say so myself).

Sandra is a sewer and quilter who also loves cats. While we roomed together she had a black cat named Daisy and I had a tortoise shell name Martha (we adopted the cats to keep them together and they came named). So when I saw this it had her name all over it. 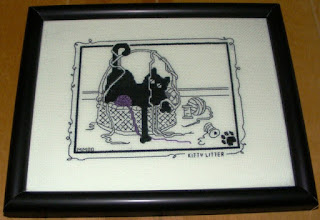 It is a Calico Crossroads Kit called “Kitty Litter” and looking at the initials and date at lower left I must have finished it in 2000.

She was born and lives in New York State, so the next one was pretty obvious too. 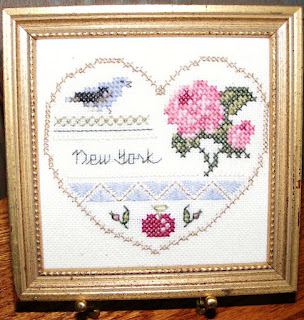 This is a Victoria Sampler kit in their series of states that included a new stitch to learn. I think this one focused on the Sprat’s Hat stitch which is the light blue band below the words New York. Not sure the year I did this.

A big shout out of THANKS to Sandra for sending these!!
Posted by Sun City Stitcher at 6:00 AM

I have a kitty just like that! Actually 3 of them, nice stitching.

I love your kitty design, it's adorable!