Last February I was working on the Heart in Hand Monthly Mania for March and thought it would be a nice gift to make each of the 12 months and put them in a wooden box that was open at the top to show off the current month while the11 other months could be stored in the box. My sister in law in Iowa decorates for the seasons, and appreciates my handy work, so I thought it would make a nice Christmas present for her.

I was then able to get 6 months in each deep frame (Jan - June and July - Dec). So I sent one with December showing in the frame and one with January showing. I forgot to put in a note of explanation so when we spoke on Christmas Day I let her know that all 12 months were there and that I had put a piece of ribbon in to help pull them up when time to change the month. Good thing we spoke, she did not realize and thought more might be coming for birthdays or future Christmases!  They were a lot of fun to stitch, a little tricky finding the frames, but it all worked out great. I took a picture of all the months laid out and December in the frame. 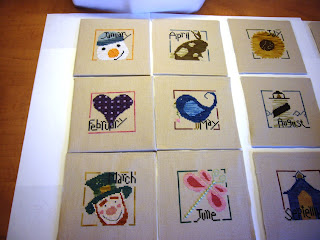 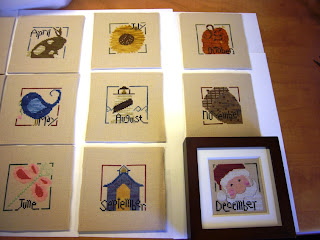 Posted by Sun City Stitcher at 9:16 AM

Awesome solution!!! They will look perfect with the frame~~

What a great idea. Congrats on finishing all 12 and then making such an ingenious plan for them. Thank you for the idea for centering the needlework. I will certainly try that.q

What a wonderful gift!