I wanted to make something special for my big brother's birthday that he could actually use. He is on his computer quite a bit, so I decided to make him a stitched mouse pad. I got the one I used for this project at Hobby Lobby, but you can also get them here. Which is all I will say on that since this is my fun stitching blog. 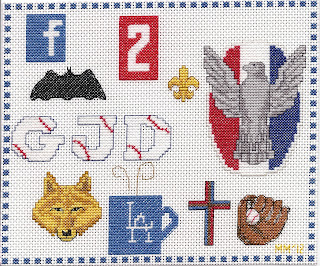 I will now explain the motifs used starting from left to right and top row. Facebook, troop two patch (troop two was his boy scout troop), the emblem on the scout badge and Eagle Scout badge - he made Eagle Scout (with a palm cluster no less).

The next row is is initials which I created from my PC Stitch software. Between the initials and the facebook logo was my attempt at a batman bat (the 60s version not the new one).

The bottom row consists of the wolf head part of the cub scout emblem. I did not have enough room for the entire emblem. He drinks coffee and is an LA Dodger fan, so I created an LA coffee mug. He has a cross in his car and has always been a tad interested in religion and then the baseball mitt. My initials and date are in yellow at lower right.

I got the baseball font, and baseball mitt from my PC Stitch software, I made up the facebook f, troop badge number, coffee mug (with a bit of help from my software) and the cross. I got the Boy Scout emblems from a book called "The emblems of the Boy Scouts of America in counted Cross Stitch" by the Vanessa-Ann Collection and Published by Zim's Inc (1986).

I think that covers it for now!!
Posted by Sun City Stitcher at 6:08 PM

Great design job!I often think about getting the PC Stitch program...not to design for selling, just as you did... for myself. He will love it.

What a thoughtful gift!

Very cute, and it definitely looks meaningful for your brother!

What a thoughtful gift - I'm sure he will love it!

What an awesome idea! I know he will love it and think of you every time he uses it. Great job!
Happy Stitching
Denise